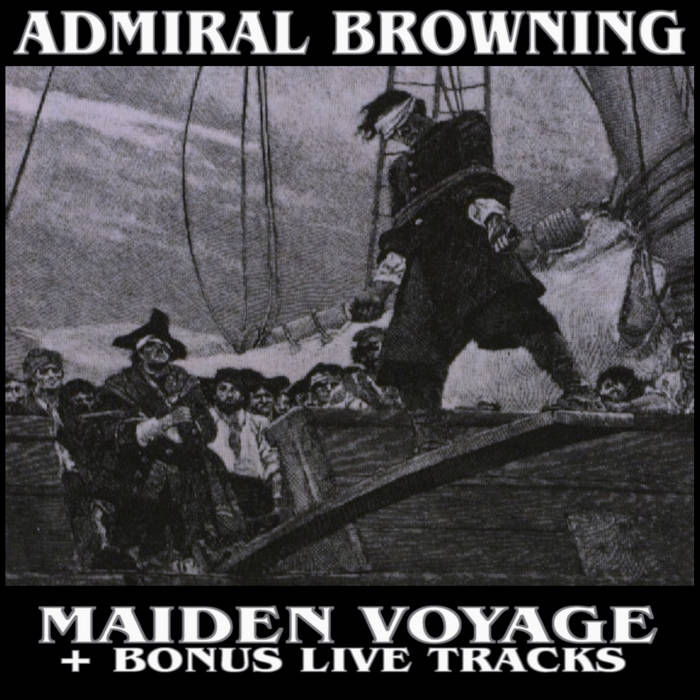 What is, or at least pretends to be, the official biography of Admiral Browning, as related to Admiral Robert Peary.


The four erstwhile shipmen of Middletown, Maryland's Admiral Browning cut their seafaring teeth in various projects and forms. The Admiral's origins lie in the restless and somewhat aimless musical imaginations of guitarist Matt LeGrow and drummer Tim Otis in or around March of 2002. Sporadic free-form jamming with shifting
lineups - including at one point both Tim's and Matt's younger brothers -continued until the new year 2004. The name Admiral Browning and the Loose Caboose was (rather mockingly and scatologically) applied to this new project. By this point Matt and Tim had begun working up some real song demos - including epic "Rotting Dobsonfly" and the math-rock inspired percussive showcase "New Hope." The chemistry was evident and it was apparent the Admiral needed to set sail for real.


The search was on for a more permanent crew. Enter John Marion, scarred veteran of several local bar cover bands, looking for a few folks who shared some common musical ground. During the very first jam session with John a new song was written - "Deus Ex Machina" - and the Admiral's second guitarist was more or less officially and immediately "hired". Soon enough, more songs were starting to flow and a bassist was desperately needed.


Though the bass position was still in flux, the Admiral's four-song _Maiden Voyage_ demo was completed in early March 2005. Soon thereafter the final peg was hammered with the union of the Admiral and Ron "Fezziwig" McGinnis, a battle-tested veteran of the early '90s Bay Area thrash metal scene looking for more musical adventure on the high seas. It didn't take long to realize Ron's thunderous sonic boom brought an all-new level of pain to the Admiral's already crushing sound, documented on a re-release of the demo with additional live tracks featuring the new low end hammer. The anchor was raised and the real adventure was about to begin!

And how to describe the sound....focused maniacally on the power of the almighty riff, these four lads have set about to create their own brand of peculiar, somewhat sophisticated and frantic stoner-prog instru-metal magick. Admiral Browning paints their seaswept doomy, bluesy sonic landscapes on a canvas informed by many corners and parts of the progressive, psychedelic, hardcore and thrash metal scenes - and the nightmarish, unsettling stuff of their fever dreams.

also thanks to paul grabenstein for bass (tracks 1-4)